I had been familiar with the famed L’Origine du monde (above) long before I first laid eyes on it at the Musée d’Orsay in Paris in the spring of 2013, as a provocative work that shocked and challenged the art and cultural establishment at a time of prudishness and reserve, and upon viewing it in person I remember thinking three things; 1) that I was surprised (as I often am) by the meager dimensions of the actual work as compared with its reproductions, 2) that I was surprised to find the inclusion of shutters on the frame, which could artificially introduce some modesty to the creator’s work should the owner or exhibitor require it, and 3) I remember remarking to my companion that the only thing I found offensive about the work was what it failed to show (the model’s face, her expression, her response emotionally to being so depicted, and so on) rather than what it did show.

Any student of the arts in society, or any student of the period, is bound to know L’Origine du monde, by sight and by reputation if not by name and by artist, and it is one of two by which they might probably know the painter, Gustave Courbet (1819-1877). (The second work is Le Sommeil, 1866, pictured below.) 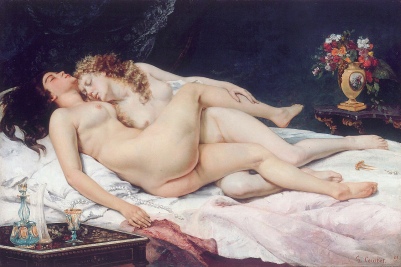 Courbet was a Frenchman, born in Ornans in 1819, and by 1850 he was creating scandals in the artistic world of the time by pioneering and pursuing the school of Realism, itself a reaction to the Romanticism and Neoclassicism of the time, which rejected the idea that life needed to be glamorized or embellished for the sake of art, and asserting instead that, to quote from Courbet’s 1855 Realist Manifesto, “To know in order to do, that was my idea. To be in a position to translate the customs, the ideas, the appearance of my time, according to my own estimation; to be not only a painter, but a man as well; in short, to create living art – this is my goal.”

In short, for Courbet, along with Jean-François Millet, Honoré Daumier, and the other Realists, there was no distinction between art and life. They painted normal, everyday people doing normal, everyday things, and they found beauty and majesty and importance in those elements of the mundane. This was a significant departure in thinking from the art of the previous century, and even from contemporary movements of the time, which saw the artist as one who introduces themselves artificially into the translation of the real into the glorified and the majestic and, for reasons that were as political as they were aesthetic, the work of the Realists was controversial and even decried in its time.

Realism said, to a world for which art in large part only included royalty, nobility, the religious, and the classical, that not only were regular people and regular things worth looking at with an artistic lense, so too were were regular people doing regular things worthy of being treated in an artistic way. The street ran both ways; it behooved those taking stock of the world in an artistic way to pay some attention to the little people, and it gave the little people the credit and grandeur that had previously been reserved for things that were a step removed from pure magic.

The work of the Realists in many ways would foreshadow what would come with the invention of photography at around the same time, and would inspire the younger generation of artists for whom Paris was the center of the artistic world at the time, a group which included the Impressionists, of whom one salient example is Édouard Manet, who painted both the Déjeuner sur l’herbe and Olympia, paintings both depicting prostitutes, in 1863 (see below). 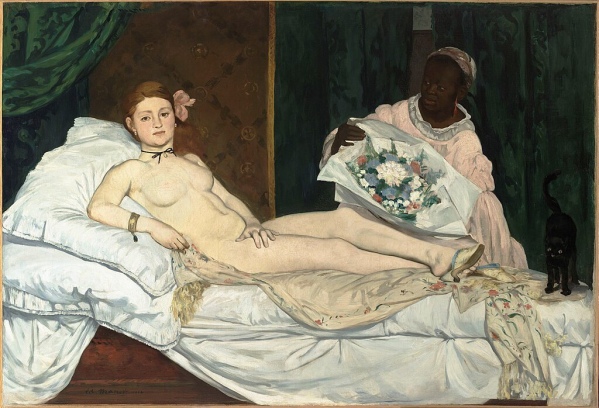 Another, slightly earlier, influence on Courbet and his milieu was Francisco Goya‘s work La Maja Desnuda, painted somewhere between 1797 and 1800. The model’s direct and unashamed gaze in conjunction with her nudity were a cause of major fuss and fervor, and the story of that work in itself is worth knowing.

This, like the Manet works, depicts a frank and personal appraisal of nudity, one that is connected more with the model herself than it is with the subject of the work, and one which feels truer to life than the vast majority of what preceded it.

But compare these with Courbet’s Femme nue couchée (below), painted in 1862:

Now I can’t imagine it’s just me, but isn’t that image just pulsing with a sexuality and a vitality that the others just don’t possess? There’s a drama and an expressiveness to both her form and the projection of her presence that is rivaled, to this point, only by depictions of literal gods and goddesses or allegorical personifications (see Hygeia (anything of Rubens’ really) and Time Saving Truth from Falsehood and Envy). And she’s just a woman. Just a regular, sexual woman.

The same can be said of Le Sommeil (above), in which the two subjects are shown in obviously post-coital bliss, and in that painting as well as others, Courbet seems to have painted not the nude, but her sexuality itself. And this approach, this gaze, is not necessarily without the explicitly prurient interest. Indeed, consider La Femme à la vague (1868, below), in which the light specifically favors the model’s most conspicuous anatomy:

And, less subtly, La Femme aux bas blancs (1864), which is, I think the earliest purely pornographic work I have seen, in that it taunts and entices the viewer in a way that is not only suggestive, but direct, and which depicts an act and a posture that is frequently adopted in modern pornography over 150 years later:

All of this can be said of Courbet’s work without reference at all to L’Origine du monde, but I learned something very interesting about L’Origine while in the process of researching this article:

What I think this means, in summation, is that Courbet could, in many ways, be considered the first creator to authentically and concertedly focus his robust artistic talents on the celebration and exploration of female sexuality, which set a precedent for pornography in a way that nothing else quite did.

We may have come a long way since Courbet, and we may have gone a long way away from what he accomplished. But in the modern age where pornography has the ability to be authentic and honest, made by passionate people who care about what they do and what they make, it seems like we’re finally circling around, and maybe if we look with the right eyes we can see what he wanted to show us.